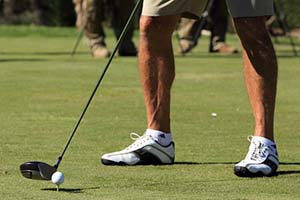 What is your propensity for striking the ‘Little White Ball’ “FAT THIN”? This learned and passionate Country Gentleman Golf Teacher knows first-hand that this propensity of taking a divot behind the ball is a torturous event. We often refer to this ‘No - No’ as turning the sod over the ball! Even taking a deep shovel full of turf and dirt in front of the ball is not a good thing! Not much can be worse in golf … perhaps only missing a two-footer for the win?

Is fat better of worse than thin? The saying ‘Thin To Win’ is actually true … unless you are needing to cross a pond in your approach. At least thin has an opportunity to run a helpful distance under control!

Have you ever dug a ditch with a #LW (Lob Wedge) under a really short shot from the fringe while looking at the cup? Not a great moment! So, you used a very lofted tool when you did NOT have to cross or get over a blocking bush or piece of bad ground? “Oh I am going to make Mickelson Magic!” How many clutch short approach shots has he missed in critical moments? Far too many! They do not call him ‘The Brides Maid’ for no reason. He has come second in dozens of Sundays mainly due to bad and perhaps arrogant decisions!

Options? “Get the ball on the dance floor and rolling end over end like a comfortable Putt as soon as possible!” How safe is your Putting in comparison to your ‘High Glorious Flop Shots’? How safe is your ‘Bump & Run’? If you do not have one of those in your bag, get one! ‘A chip is a Putt With A Hop’! Keep It Stupid Simple and be happier out there!

Your ’555 Team’ has a saying … “Around The Fringe Loft Is Not My Friend!” First choice of tool is Putter! Second is Putter! Third is putter! Fourth is putter! Fifth is #8 Iron! “On the ground and behaving like a putt as soon as possible … unless you are a masochist!”

Are you driving your own bus or a brain-dead passenger? That is absolutely your choice!

It is your parade!